London temperatures have reached 104°, the highest in history. Amid a heat wave, hot temperatures have been in the forecast. The UK Met Office preparing for the extreme heat issued their first ever Red Extreme heat warning. Average high temperatures in London this time of year max out in the mid-70s. Today, the temperature topped out at 104.4° at the Heathrow Airport. The previous record was set in 2019 at 101.7°.

Across the pond, heat is becoming a big problem for several countries. The heatwave that started in Spain, Portugal, and France has left these countries evacuating people and battling wildfires. Sources say that at least 1,000 people have died due to the extreme heat and over 16,000 people have been evacuated from their homes so far. Temperatures repeatedly reached 43°C (109°F) in Spain from July 10 to 15. The heatwave has begun to move towards the northeast.

The heat spell is expected to subside across Europe as we head into the rest of the week and a broad area of low pressure moves into the area providing some moisture and some cool-down showers.

Heat leads as the #1 cause for weather related deaths globally. Thousands of people displaced by wildfires caused by the heat surge in parts of Europe. The two surges in heat are completely unrelated. The United States is seeing a broad area of ridging developing which is locking in the heat across the area. Europe is seeing repeated days of excessive heat across large areas.

A Heat Advisory has been issued for the Capital Area. This means heat index values will be at or above 108° for several parts of the day. The Heat Advisory will be expiring at 7:00 pm. Local FORECAST.

Sun and Heat Safety: Some friendly reminders for your summer of fun events—sunburn can occur in less than 15 minutes with the extreme U.V. Index typical of this time of year. In addition to that, heat exhaustion and heat stroke can set in just as quickly. Seek medical attention if you or somebody you know is affected. While we all enjoy a list of cool beverages, be sure water is at least a part of that list! Finally, look before you lock. DO NOT leave people or pets in an unattended car.

The Climate Prediction Center (CPC) is predicting a high likelihood that most of the United States will see above-average temperatures for the next 6-10 days. Now although this is just a prediction based on climatological events, here in Baton Rouge we have already seen temperatures well above the seasonable average of 92° this week. We are forecasting mid-90s into the weekend. Most of the United States will have a chance to see record-breaking heat. Although we are used to high summertime temperatures and even warmer heat index values, heat can quickly become a nuisance if not taken seriously. 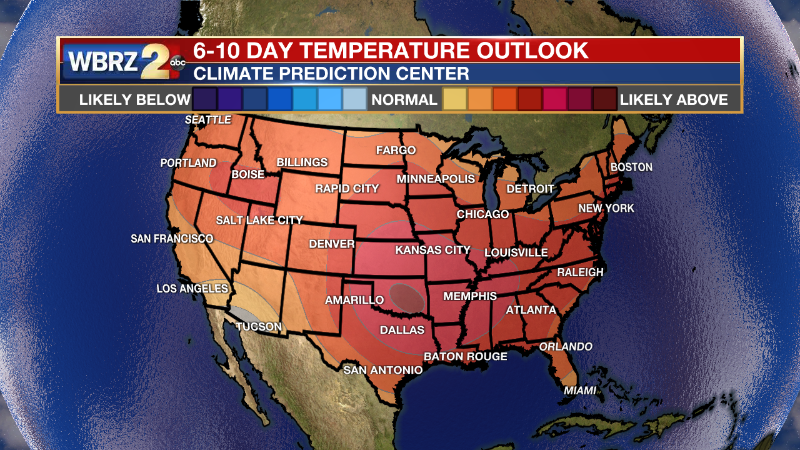