The much-awaited cold front has pushed through the region and breezy, comfortable conditions are expected through the rest of the week. No direct impacts from Ian are in store for the local area, but occasionally gusty winds and ongoing dry conditions need to be monitored.

The combination of low relative humidity near 25 percent and winds between 15 and 20 mph with higher gusts will produce a high fire danger across the area. Any fires that develop will likely spread rapidly. Outdoor burning is not advised.

Many locations in the region have gone more than two weeks since measurable rain and dry conditions will continue for the duration of this week. With increased winds due to Hurricane Ian nearby in the Eastern Gulf of Mexico, favorable fire conditions could persist through much of the week. 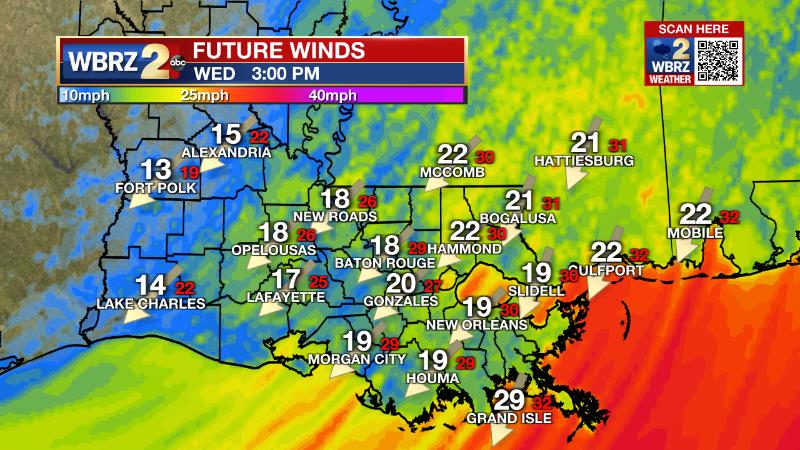 In addition, a WIND ADVISORY has been issued for areas surrounding Lake Maurepas and Lake Pontchartrain. Northeast winds of 20-25mph with gusts over 40mph could cause spotty tree and powerline damage.

Next 24 Hours: Skies will stay clear overnight with northeast winds of 5-10mph. Low temperatures will bottom out around 56 degrees. Around the perimeter of Ian, a few high clouds may mix in to otherwise clear, blue skies on Wednesday. There will be an ongoing northeast breeze of 10-15mph with a few higher gusts. It would be a good idea to secure any loose, outdoor objects. High temperatures will maximize around 83 degrees.

Up Next: The extended forecast is looking rather pleasant. Breezy conditions will persist through Thursday. The remainder of the workweek will feature clear skies, highs in the low to mid 80s and lows in the upper 50s. Winds will ease over the weekend as temperatures gradually moderate with highs in the upper 80s and lows in the low to mid 60s. Still, no rain chances are currently advertised through the early next week. CLICK HERE for your detailed 7-Day Forecast. 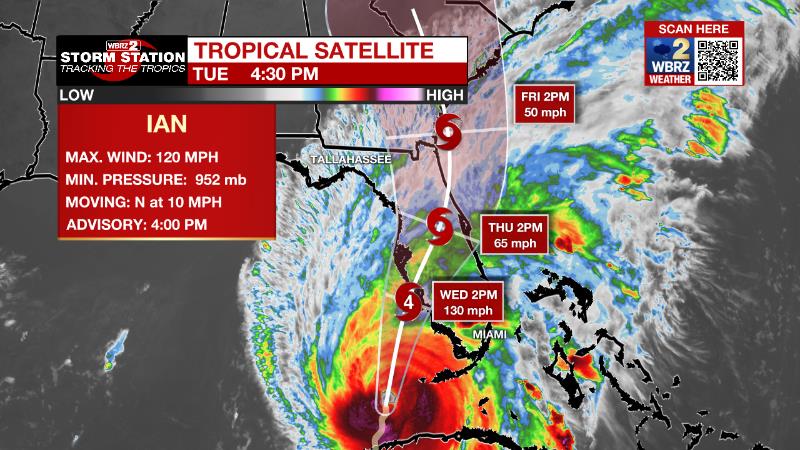 The Tropics: Hurricane Ian continues strengthening in the southeastern Gulf of Mexico. As of 4pm Tuesday, Ian was producing 125mph maximum sustained winds southwest of the Dry Tortugas and moving north at 10mph. The storm will gradually turn north and then northeast while continuing to strengthen on approach to the west coast of Florida through Wednesday. Maximum storm surge of 8-12 feet is expected including 4-7 feet in Tampa Bay. Parts of central west Florida will experience hurricane conditions with 12-16 inches of rain. The slowing forward speed of Ian could cause some much higher amounts.

An area of low pressure located several hundred miles west of the Cabo Verde Islands continues to produce disorganized showers and thunderstorms. This activity has changed little in organization over the last two days. Upper-level winds still appear favorable for some additional development, and there is a sixty percent chance of a short-lived tropical depression over the next couple of days. Further development will become less likely by the end of the week due to increasing upper-level winds. The disturbance is forecast to meander for the next day or so and then turn north-northwestward by Thursday.

The Explanation: Thermometers will stay below average relative to their daypart for nearly a week. Dew point temperatures will be in the 40s and 50s for several days leading to very low humidity. Meanwhile, winds will increase due to the pressure gradient between Hurricane Ian to our southeast and a surface high to our northeast. The breezy conditions coupled with the low relative humidity will bring a rise in fire weather conditions through Thursday. In general, winds will be around 10-15mph, but some higher gusts are possible, especially closer to the coast and I-55. By the weekend, the pressure gradient will weaken and allow winds to slacken as Ian moves inland and loses intensity. Temperatures will gradually moderate.