If you enjoy the warmth, one more afternoon in the upper 70s is ahead. A cold front will bring the need for layers again by the end of the week.

Tonight & Tomorrow: Low clouds and patchy fog are expected overnight. Low temperatures will be well above average for the time of year, stopping in the low 60s with southeast winds of 5-10mph. Fog will dissipate to some sunshine through the first half of Wednesday. High temperatures will make it into the upper 70s and low 80s with a south wind of 10-20mph. A cold front will approach the area later in the day. Initially, some showers and thunderstorms will try to pop during the afternoon. A better organized line of rain and thunderstorms is then expected between 5 -11pm. Especially along the line, one or two storms could produce strong, gusty wind. The Storm Prediction Center has assigned a Level 2/5 "Slight Risk" for severe weather. 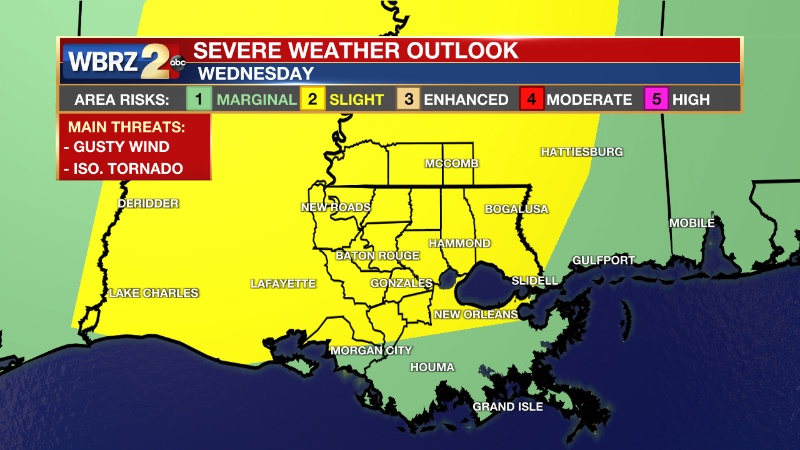 Up Next: The cold front will push through by Thursday morning with rain likely finished before dawn. Gradual clearing is expected into the afternoon hours. The cold air mass trailing the front will really build in on Friday. Though temperatures may begin the day in the 40s, they will not get much farther than the mid 50s. Some clouds may even pass as the cold air mass arrives, but no precipitation is expected. Plan to bundle for Mardi Gras parades next weekend with highs in the 50s and lows in the 30s. It will be dry though.

Detailed Forecast: South winds will continue to increase low level moisture overnight into Wednesday. These conditions will be supportive of fog, especially for marine areas. Inland development is a bit more questionable due to elevated wind speeds and the presence of an existing low cloud deck. Fog should begin to dissipate by mid to late morning on Wednesday as surface heating takes place. Then, a sharp upper-level trough of low pressure will move into the Mid-South pushing a cold front into the local area. Initially, some showers will pop in the afternoon as instability maximizes with daytime warming. A more organized squall line is expected a little after dusk which is when shear should be at its highest. So, while the ingredients for one or two severe thunderstorms appear to exist on Wednesday, there is some question as to whether they will overlap in the late afternoon and early evening. No matter what, the most favorable upper-level winds will stay well north of the area all day and so this event has limited potential, at best. By Friday, upper-level trough will be amplifying across the region with a strengthening surface high pressure system to the west. These two features will initiate a push of colder and drier air into the local area. Temperatures will be well below average from Saturday morning through Sunday afternoon. Lows should reach the mid-30s both mornings this weekend. By early next week a warming trend begins to take shape as an upper-level ridge of high pressure builds into the region Monday. The strong surface high will begin to move into the Eastern U.S., which will bring return flow at the surface. By the middle of next week, the next frontal system will approach.

BATON ROUGE - A woman was reportedly forced out of her car at gunpoint by a pair of robbers just outside Baton Rouge's historic Spanish Town district.

The carjacking was reported around 4 p.m. Tuesday near the corner of North Street and N 12th Street, just east of I-110, according to the Baton Rouge Police Department.

The woman was not seriously hurt.

This is a developing story.

BATON ROUGE - More than a decade after Oscar Lozada allegedly killed and dismembered his wife, a jury has been seated in the accused killer's murder trial.

The selection process started Monday morning and continued into Tuesday afternoon, with a jury of nine women and three men being seated. The defense previously objected to having a mostly female jury, given the nature of the allegations.

After Sylviane's disappearance, Oscar fled the country with their young daughter. In court Tuesday, there was compelling testimony from the couple's former neighbor who was in communication with Oscar in the months after Lozada left for Venezuela.

In those texts, Oscar said he and Sylviane got into a fight over an alleged affair she was having. Lozada says she walked out after that and never came back. He said that he doesn’t think Sylviane is okay and that it’s possible his wife could have hurt herself.

In the prosecution's opening statement however, they referenced an interview with Mexican authorities where Oscar admitted to strangling his wife.

BATON ROUGE - Law enforcement and animal control are investigating a suspicious incident involving a horse that collapsed and died in front of the Southern University Law Center.

A spokesperson for the university said the horse was privately owned and that someone brought it to campus. An eyewitness told WBRZ the horse collapsed in front of the law center and the rider fled the scene before police showed up, leaving the animal to die.

Animal Control said the horse did not have microchip, brand or tattoo that would help identify its owner.

The horse was removed with a crane and transported to a landfill. Animal Control confirmed a necropsy will not be done to the horse.

According to Animal Control, they are waiting on Southern University Police to release surveillance video of the incident.

Want to be a guest on the Noon News?

Want someone from your event or organization to be a guest on the Noon News? Click here to fill out our Noon News Guest Request form!