The story of the week will be warmth. Any showers and thunderstorms will be tough to come by Tuesday through Friday.

Next 24 Hours: Isolated showers and thunderstorms should diminish through the early evening hours. From midnight through dawn, skies will partially clear with low temperatures dipping into the low 70s. Tuesday will be mostly sunny and warm with high temperatures in the low 90s. Once again, a stray shower or thunderstorm will be possible, mainly north and east of Baton Rouge, after 2pm.

Up Next: Wednesday is expected to be the warmest day of the week with high temperatures ranging between 91-93 degrees. That is not to say that Thursday and Friday will be a whole lot cooler with high temperatures chalking up highs in the low 90s as well. A largely dry forecast is expected for the back half of the workweek. By the weekend, and especially Sunday, a weak front moving into the area will bring a significant uptick in the numbers of showers and thunderstorms. This could possibly provide some meaningful rain for the area. CLICK HERE for your detailed 7-Day Forecast. 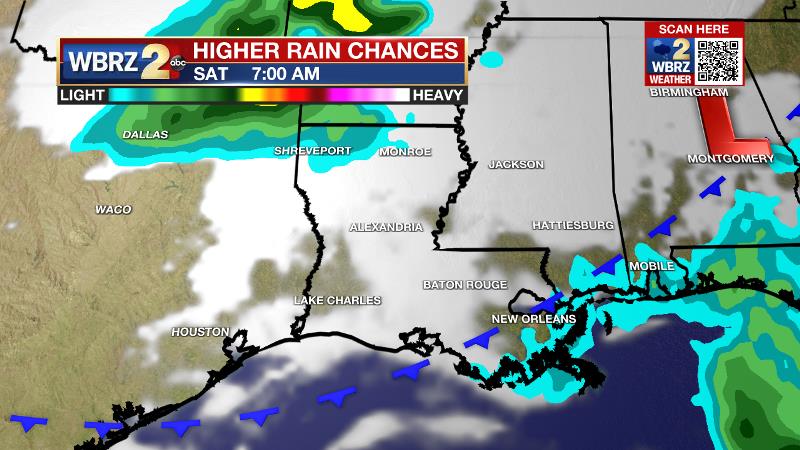 The Tropics: The National Hurricane Center has started issuing official, tropical weather outlooks. While this was previously done on the first day of hurricane season, June 1, last year the NHC decided to start outlooks earlier due to the recent string of pre-season tropical systems. In this year's first outlook, no development is expected over the next 5 days.

For several days now, some computer models have been consistently hinting at tropical activity around the Gulf of Mexico before Memorial Day. There are a lot of "click-bait" sources providing misleading information about that possibility. It is important to know that this is only one model, and it tends to exaggerate tropical development this time of year. There are many weather variables that go into tropical development like sea surface temperatures, upper-level patterns, wind speeds and so much more, that one single model cannot be the sole cause for alarm. Trust that the Storm Station Meteorologists are tracking tropical developments around the clock. Stay connected and we will keep you ahead of the tropics all season long.

The Explanation: An upper level ridge of high pressure will begin to build across the region on Tuesday, shifting the more favorable instability and vertical motions for showers and thunderstorms to the east. It is still feasible that one or two late day thunderstorms could get going north and east of Baton Rouge. By Wednesday, the center of the ridge should result in enough subsidence (sinking air) for a completely dry forecast. The ridge will begin to break down by the end of the week but forecast model guidance is in agreement on maintaining a dry forecast until the weekend. By then, the upper level ridge will by flattened by a broad upper level trough of low pressure moving across the Midwest. This trough will force a weakening cold front toward the Gulf Coast. Ahead of it, warmth will continue on Saturday but with enough lift in the area to trigger some showers and thunderstorms. By Sunday, the front is expected to crawl through the area as another trough in the upper levels provides an additional nudge. More widespread showers and thunderstorms are expected for the second half of the weekend. If this front can clear the area, big if, we could feel some slightly lower humidity early next week, but do not hold your breath waiting for that this time of year.